As you bike along Ballona Creek or relax at Gwen Moore Lake in Kenneth Hahn Park, you might catch a glimpse of a duck drifting by or a shorebird that has come in from the wetlands to scour for food along the creek. The proximity of the Baldwin Hills to the ocean and Ballona Wetlands (approximately 4 miles) and its small lake combine to make it attractive as habitat for some aquatic bird species. Though neither the lake or creek offer natural environments for these birds — the lake is man-made and the creek is a large concrete channel — the presence of water still provides respite from the surrounding urban environment for these birds.

Herons and sandpipers have been observed in the area, along with the more common Western Gull (pro tip: birders do not call them “seagulls”), among other bird species. Beyond the waterbirds specifically, the water also attracts all types of birds for bathing and drinking. 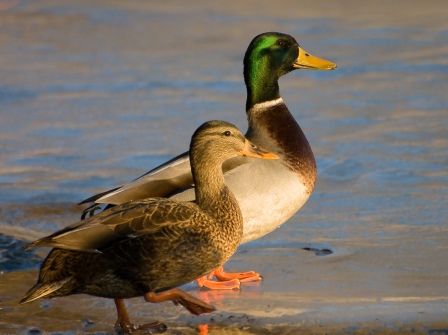 Image by Fcb981 via Wikimedia Commons

When you think of a duck in the city, most people usually think of a Mallard with its green head and yellow bill, gliding around ponds and looking for breadcrumb handouts. This distinctive coloring is actually reserved for males only, with female Mallards displaying spotted brown coloring. These ducks are often seen in Kenneth Hahn Park at the fishing pond and are also occasionally spotted along the Ballona Creek according to citizen observations on eBird. They are also known to breed in the Baldwin Hills, maintaining populations at the lake in Kenneth Hahn.

It is easy to think you are looking at a duck when you see an American Coot float by on Gwen Moore Lake in Kenneth Hahn Park. What you are actually seeing is a bird that more resembles a chicken, hence its other common name “mud hen”. Though it does not have webbed feet, the American Coot can be found swimming on water bodies, eating algae, small insects, and water plants. Surveys have documented it breeding along the edges of Gwen Moore Lake. Look for its all-black body and bright white bill in Kenneth Hahn Park and in Ballona Creek.

Image by Howcheng via Wikimedia Commons

Another common duck seen in Kenneth Hahn State Recreation Area is the American Wigeon. Visiting during the winter months, this bird can often be seen on lawns in Kenneth Hahn and floating through the fishing pond. Male American Wigeons can be easily identified by the white patch on their head. This bird likes to graze and you will often find it eating vegetation in fields alongside bodies of water. Other times you might just see its tail end wiggling above the surface of the water, as it grabs at underwater vegetation. Based on citizen observations, this bird is most common at Gwen Moore Lake, though there have been a number of sightings along Ballona Creek as well. 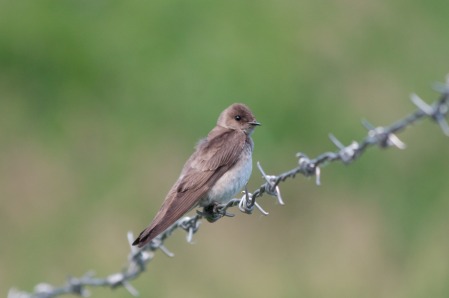 Image by Dori via Wikimedia Commons

Northern Rough-winged Swallows might not catch your eye, with their pale brown coloring and small size. But surveys have found them to be common summer visitors (between February and August) that also breed along the Ballona Creek. These birds typically are found nesting in drainpipes and culverts which are found along the Ballona Creek channel. If you’re biking or jogging along the creek, look for this small bird swooping down to catch insects along the water.

Common in the nearby Ballona Wetlands, where it also breeds, a number of Black-necked Stilts have been observed along the Ballona Creek alongside the Baldwin Hills. This shorebird is easily identified by its thin, red stilt-like legs and black and white body. They prefer shallow wetlands, but can be seen wading along the creek in search of aquatic insects. Based on citizen data on eBird, the Black-necked Stilt remains along the creek channel, with very few if any sightings in the Baldwin Hills. So keep an eye out for this distinct bird the next time you travel down the Ballona Creek!

Image by Britta via Wikimedia Commons

Another common Ballona Wetlands bird that can be spotted along the Ballona Creek near the Baldwin Hills, is the very tiny Least Sandpiper. This winter visitor tends to stick to the edges of water in small groups, poking through the mud looking for insects. Look closely, because the Least Sandpiper is one of the smallest shorebirds in the world and only weights about 1 ounce. You will find this bird in greater frequency the closer you get to the wetlands as you make your way down Ballona Creek toward the ocean.